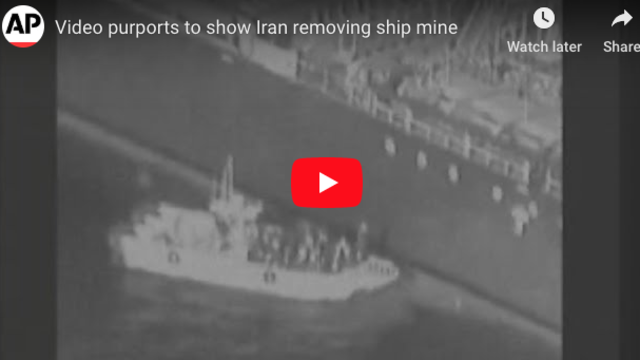 he U.S. military released a video late Thursday evening that it says shows Iran's Revolutionary Guard (IRGC) removing a mine from a targeted oil tanker, hours after the Trump administration claimed that Iran was responsible for an attack on two oil tankers in the Gulf of Oman.

U.S. Central Command spokesman Capt. Bill Urban released a timeline and photographs suggesting that the U.S. military observed Iranian vessels returning to the tanker to retrieve the unexploded mine, The Washington Post reported.

“At 4:10 p.m. local time an IRGC Gashti Class patrol boat approached the M/T Kokuka Courageous and was observed and recorded removing the unexploded limpet mine” from the Japanese-owned Kokuka Courageous, Urban said, according to the Post.
iran mine by N/A is licensed under Youtube Youtube