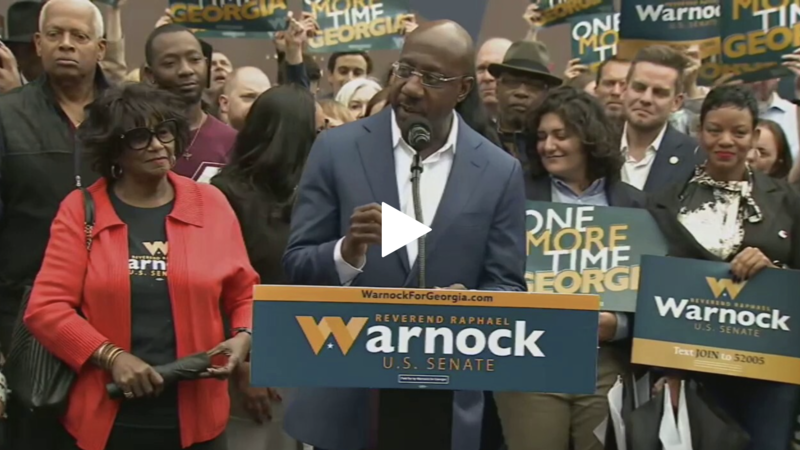 In a taste of the expected deluge of ads to come in battleground Georgia’s burgeoning Senate runoff election, the National Republican Senatorial Committee (NRSC) takes aim in a new commercial at Democratic Sen. Raphael Warnock as a "great actor" who "votes with Joe Biden 96% of the time."

The TV spot by the Senate GOP’s campaign arm — which started running on Thursday and which is backed by a low six-figure buy according to the national ad tracking firm AdImpact  — is the first in Georgia’s runoff campaign between Warnock and Republican Senate nominee Herschel Walker, in a showdown that may decide whether the GOP wins back the chamber’s majority.

Warnock finished roughly 35,000 votes ahead of Walker out of nearly 4 million votes cast in Tuesday’s election. The Georgia secretary of state's office announced Wednesday that the Senate election was headed to a runoff since no candidate received over 50% of the vote. According to the latest unofficial and incomplete returns, Warnock was at 49.4%, Walker at 48.5% and Libertarian Party nominee Chase Oliver at 2.1%.

Under Georgia law, if no candidate tops 50% of the vote in the general election, the two top vote-getters face off in a runoff, which this cycle is being held four weeks later on Dec. 6.